Six Stages of Board Evolution 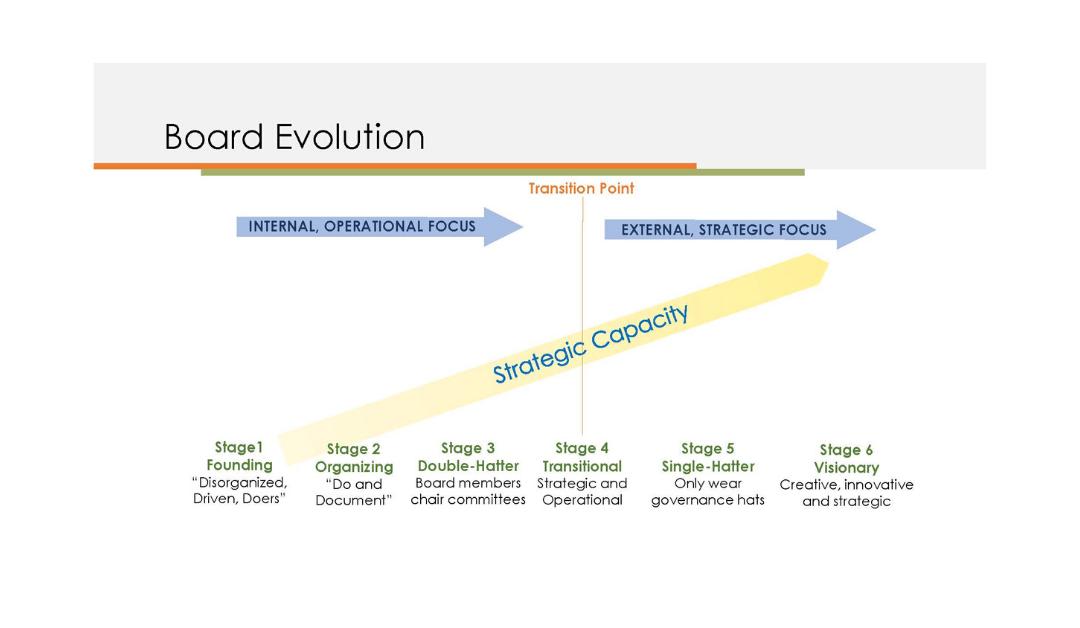 The six stages of board evolution, which are the basis of the rEvolutionary Governance system, are:

There are a few key concepts that apply to the stages overall. First, as a board moves forward through the stages, its strategic capacity increases. 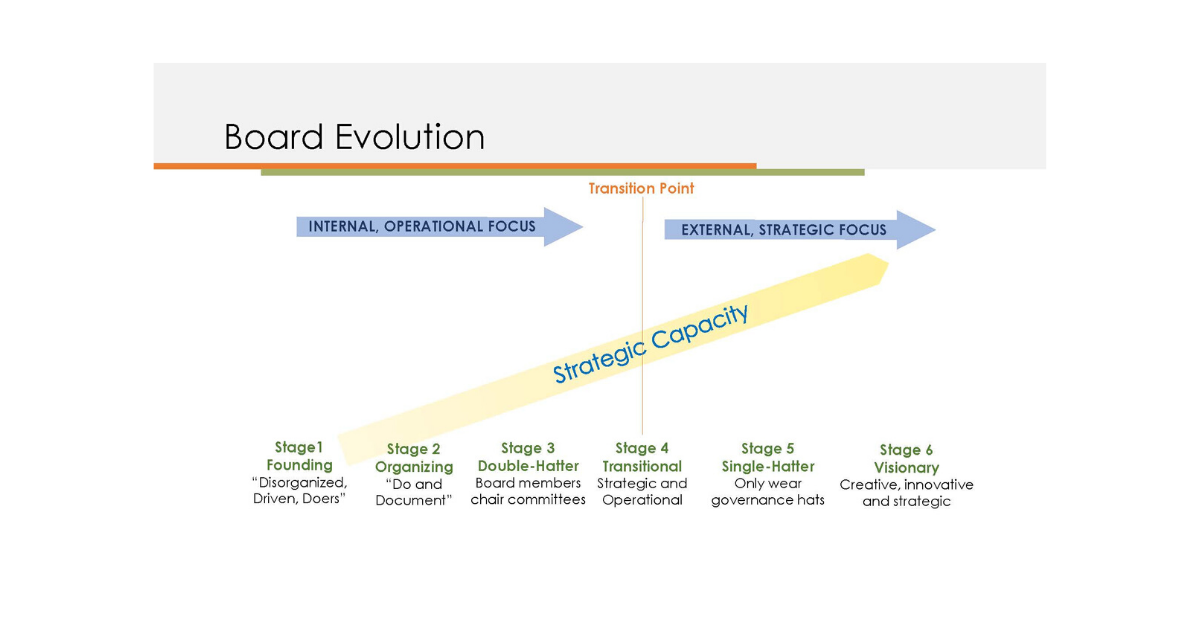 One way to describe this would be that at Stage 1 Founding, the board puts nearly all of its focus toward discussing and executing operational detail and very little (if any) focus on strategy. As the board progresses through to Stage 3 Double-Hatter, the operational focus continually decreases but still outweighs strategy. Stage 4 Transitional is where, for purposes of this example, board focus is roughly equal on strategy and operations. Stage 5 Single-Hatter has a higher ratio of strategy to operations. Finally, at Stage 6 Visionary, very little if any time is spent on operational detail. The board is engaged almost exclusively in building a future-focused organization and leaving operational execution entirely to staff and committees.

Summary of the 6 Stages of Board Evolution

Every board begins at Stage 1, the Founding phase. During Stage 1 Founding, the organization is driven by a small group of passionate individuals with a great idea. The board members best suited to this stage could be described as “unorganized, driven, doers.” During this stage work gets done without formal structure. There are no policies and procedures, no formal committees, no job descriptions, and financial reports may be a checkbook and “how much is in the bank.” Everyone does what needs to be done. And “everyone” is generally a very small group.

Stage 2 on the continuum is the Organizing phase. During this stage the small group of people from the Founding stage have begun to write things down, including job descriptions, notes on processes, committee descriptions, etc. There may be hotel contracts and event scripts to refer to and build upon. There may be a few policies and procedures in place, as well as a handful of committees likely consisting entirely of board members. This stage could also be referred to as the “do and document” stage.

Stage 3 is called the Double-Hatter phase because board members must wear a governing or board hat and switch to an operational or committee role hat. A Stage 3 board is a “working” board. In this phase the board has recruited volunteers beyond the initial core, it may have hired staff, and has generally become more organized. But there is still a relatively small cadre of volunteers that do the vast majority of the organization’s work.

Navigating a dual role is key at this stage. Board members may chair a committee or even more than one committee. In some cases they may be the committee – a committee of one. While there may be some big picture thinkers on the board in this phase (typically officers), they are in the minority. Stage 3 boards have a highly operational focus.

As explained earlier, the strategic capacity of the board increases as it progresses. Stage 4 Transitional is where the crossover occurs from the board’s focus being primarily operational to primarily strategic. In this stage, the board is transitioning from “doing” to “directing” the work of the organization. Stage 4 Transitional boards thus have a mix of doing and directing mindsets, which may create tension between board members who are comfortable shedding operational roles and those who are not able to modify their role.

In Stage 5 Single-Hatter, board members just wear their directing hats. They don’t chair committees, although they may be on a committee as a board liaison to bring information to/from the board, or serve as a committee member but not as a representative of the board. In this phase the board shifts its focus entirely out of operations and on to true governing board work – setting high-level policy, enabling the organization and providing strategic direction.

A board will find itself in one of the following four states in relation to the 6-stage continuum:

Factors that either enhance or inhibit the board’s culture, volunteer leadership, executive staff leadership, financial status, growth, and so forth, play a role in shifting the board’s evolutionary stage. Following are potential reasons why a board may find itself in one of the four states.

Suppose a board is deep in operations and consistently hovers in Stage 3 Double-Hatter. The board hires an experienced, capable, strategic and board-savvy CEO who adeptly handles staff operations and builds organizational capacity. This allows the board to truly focus on the big picture. Under the new CEO, the board quickly progresses to a “directing” vs. “working” board and becomes more strategic and visionary.

Suppose the organization has a highly effective governing board positively engaged at Stage 5 Single-Hatter.  A board fight ensues resulting in lawsuits, a huge drain on finances, and resignation of the CEO. As a result of the incident, the board is forced to focus inwardly at operations and righting the ship and regresses to Stage 3 Double-Hatter, a hands-on working board, until the CEO’s replacement is hired.

The resources, sophistication, and market position of an organization play a significant role in the degree to which a board can move along the continuum. Organizational limits may dictate that a board remain indefinitely at a certain stage.

For example, a municipal-level professional association in a small, remote town may have a very limited number of professionals residing in the area. The group is limited to being all-volunteer, never having the resources to hire even part-time staff or build a deep bench of volunteers. Such a group may remain indefinitely at Stage 2 Organizing or Stage 3 Double-Hatter and that’s fine. Their goal should be to maximize their capabilities at the stage they are in to best serve their stakeholders.

If an organization is not facing internal or external limitations, then its board should, by all means, strive to develop along the continuum. Whatever stage an organization’s board occupies should match its capacity. If it has the capacity – that is, the necessary staff, volunteer and financial resources, policies, procedures and systems – to be farther along the continuum, its failure to progress and realize its potential will hold the organization back.

Using the Stages as a Pathway to a Better Board

By Identifying where your board lies on the 6-stage continuum, the board can systematically focus on only those areas of board development that will either enhance the board’s effectiveness at its current stage or help move it to the next stage.

To see in detail the specific board member qualities, ideal group dynamics, strategic focus, policies and procedures that need to be established and implemented at each stage on the continuum, download a complimentary copy of the rEvolutionary Governance Handbook. 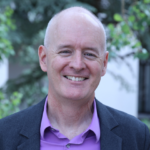